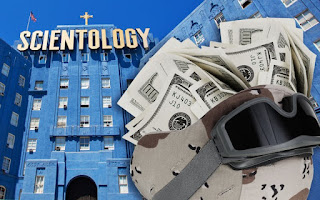 Thanks to taxpayer dollars, a research team is testing L. Ron Hubbard’s controversial ‘purification’ theories on veterans suffering from Gulf War Syndrome.
Inside a tiny sauna located underneath a brick business park in Annapolis, Maryland, a large man has been sitting and sweating for almost four hours.

Participant No. 29 is a veteran of the first Gulf War and a subject in a government-funded study aimed at treating the nebulous cluster of symptoms known as Gulf War Syndrome. Wearing gym shorts and a wide grin, he rakes a hand towel up and down his soaked upper body, then waves and yells through the glass door, “C’mon in!”
Read more...