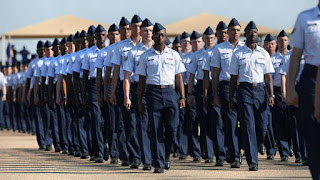 The pace of suicides in 2019 so alarmed Air Force leaders that the service’s top commander, Gen. David Goldfein, ordered a “tactical pause” in operations in July to raise awareness of the problem. He warned that suicides could exceed 150 by the end of the year if nothing was done.


Goldfein’s action appears to have had an effect. Suicides occurred at a rate of about 13 per month before the pause and dropped to an average of 5.6 a month for the rest of the year.


The record 2019 total was shown in an Air Force graphic displayed on a Facebook group of airmen, non-commissioned officers and senior NCOs (called “Air Force amn/nco/snco”).


The graphic was marked for official use only within the Pentagon. A Pentagon official, speaking on condition of anonymity, confirmed its authenticity to the San Antonio Express-News.
READ MORE,,,
Posted by Sgt. Stephanie J. Shannon at 8:57 PM