Women veterans don't get equal treatment at the VA, so Congress is launching a task force 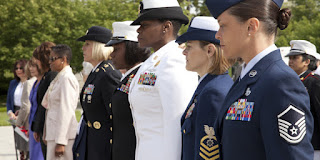 During Andrea Goldstein's time as a Naval officer, she was frequently the only woman in the room "where life and death decisions were made."
But the teammates who were supposed to guard her life in turn "sexually harassed and belittled" her because of her gender.
Since leaving the military, she says it's not gotten any better.