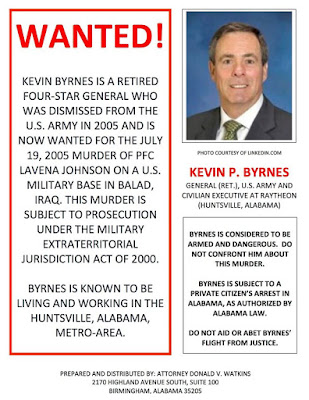 
No Pushback on Plan to Arrest General Kevin P. Byrnes
By Donald V. Watkins
©Copyrighted and Published (via Facebook) on March 1, 2016
...
Something strange but positive is happening in the murder case of Pfc LaVena Johnson. On February 14, 2016, we publicly named former four-star Army general Kevin P. Byrnes, a Huntsville, Alabama resident, as the person who murdered Private Johnson. On February 28, 2016, we announced our plan to effectuate a citizen’s arrest of General Byrnes using the arrest powers codified in Section 15-10-17 of the Alabama Code. After his arrest, Byrnes will be delivered to a U.S. magistrate in Birmingham, Alabama, as required by the Military Extraterritorial Jurisdiction Act of 2000.


Since we made these two announcements, there has been absolutely no pushback from the Pentagon or any federal law enforcement officials on our plan to arrest General Byrnes. Back-channel communications in Washington suggest that the current Pentagon leadership wants General Byrnes arrested and held accountable for the murder of Private Johnson. However, they do not want to initiate criminal proceedings themselves. The arrest will be used as a triggering event for the Pentagon to reopen its 2005 investigation into Private Johnson’s death.

The murder of Private Johnson and subsequent cover-up by the Pentagon occurred on the watch of President George Bush and Secretary of Defense Donald Rumsfeld. There is no longer any perceived strategic value or vested interest in the Pentagon carrying out a cover-up of Private Johnson’s murder for the purpose of protecting General Byrnes.


Rumsfeld fired Byrnes as an Army general on August 8, 2005. His close military friends are no longer in positions of power and influence. Byrnes, who now works as a top executive at Raytheon, is presently viewed by the Pentagon as a "liability".


Interestingly, General Byrnes has not demanded a retraction of our designation of him as Private Johnson’s murderer. In Alabama, “truth” is a complete defense to any defamation of character legal action. No such action has been threatened, and such is not likely to occur in the future.
Our arrest team has been assembled and is making detailed plans for General Byrnes’ arrest. He will not be arrested at his home or place of work. Byrnes’ arrest will be effectuated in a professional manner and in accordance with state and federal laws.
Stay tuned….
Posted by Sgt. Stephanie J. Shannon at 11:46 PM

I've read articles stating this going all the way back to March of 2016. Has he been arrested yet? Do you know what is the hold-up on his arrest? I want justice for this beautiful young girll

It's past time for this POS to go to jail-what's up?

Good Luck. This is a very odd case indeed.

what I've read from Mr. Watkins seems to state that she walked in on the General and the woman he was having an affair with. Does this imply that she was either full or partial witness to an encounter between Byrnes and PFC Johnson?

Are you suggesting that PFC Johnson and General Byrnes were having an affair? I've never heard this version if that's what you meant.

I read that he was having an affair with a civilian does that mean it was an Iraqi women? How do we know they were having an affair maybe he was raping this women too and maybe Lavena heard the women screaming or something and that maybe prompted her to walk in and see what was wrong.

So a year later...is it really that hard to find him. I did a simple LinkedIn search and he is cruising through life with a career as a vice president. We shouldn't make announcements like this unless REAL action is being done.

Apparently they don't have the evidence that they claim they have against General Byrnes or he wouldn't still be walking around. So Sad.

No!!!
It's was said that Lavena walked in on Colonel Byrnes, and the female he was having an affair with...So Colonel Byrnes had to kill Lavena so as to not have any witnesses, especially after he had been given a direct order to end the affair

Idiot, it's not Colonel Byrnes. General Byrnes, and his consensual relationship was in Washington DC, not Iraq. Learn a few facts before you spread blatantly false lies.

Kevin P. Byrnes is a retired United States Army General, who was officially relieved of command in August 2005, after 36 years of military service, for disobeying a lawful order from Army Chief of Staff Peter Schoomaker.

Piece of shit is a general.

Wish Obama would have stepped in. Prayers for her family. Never trusted Rumsfeld.

Pfc LaVena Johnson would have been celebrating her 33rd birthday today, if she had not been murdered. Praying for #JusticeforLaVenaJohnson

What's the hold up. When will he be arrested.

I believe PFC Johnson walked in on him with a female iraqi captive. These cave beast must be held accountable for their dirt. He was violating an Iraq woman and what was being done to her , well this upstanding general could not be shown to be of the dispicable ilk for which he was capable of. He's a monster.

Its a shame how the government cover up they own mess.young lady neck was broken broken nose broken teeth and she supposedly shot herself with a M16...GTFOH

It says he was pardoned by bush in another article?

Peace is in my ❤️ at least. Reat a little easier my precious angel LaVena;We caught him.

Obama wasn’t the President than.

Exactly!!! Like we’re stupid or something. She wouldn’t even be able to reach the trigger. Then saying her big toe when they know damn well she was wearing shoes. Her anus, tongue, and part of her vagina was missing with gloves glued to her hands, a classic cover-up.

Anybody down to take action?

Why haven't anyone called his job or shown up with signs to expose this beast as the devilish murderer that he is.

Okay wtf authorities just forget LaVenas killer is still free? It's not surprising, the whole country of the u.s. is corrupt and disgusting in every level. Killers somehow have more rights than victims and their loved ones. Just sickening. It's time to do better dammit!