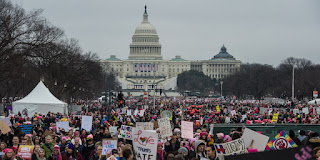 Task & Purpose interviewed veterans who attended The Women’s March on Washington to find out why they sympathize with the movement’s message.


On Jan 21., the day after the presidential inauguration, hundreds of thousands of people from across the country poured into the nation’s capital to participate in The Women’s March on Washington, a protest against the Trump administration that inundated the streets of D.C. with a sea of protest signs and pink hats. Task & Purpose spoke with a group of veterans who participated in the event. All had come to stand in solidarity with the movement and its call for universal rights and equality, which march participants believe are now under threat by the new administration. Of course, each had his or her own personal motivations for marching, too. Here’s a lightly edited version of what they had to say.